It is no secret that the United States has been involved in a plethora of wars, from the American Revolutionary war that birthed a new nation within “The New World,” to the Iraq war and the “war on drugs.” To any spectator, outside or in, it seems as though the United States is obsessed with war. It is not to say that its citizens are, but its government most definitely is, whether they are aware of it or not. Some would argue that going to war is not a particularly bad proposition because wars are good for the economy. Perhaps certain wars have had somewhat of an economic benefit, but the killing of thousands upon millions of innocent people is not a force to be reckoned with in the name of “the economy.” The United States is perceived by many Americans to be the super power of the world protecting freedom, liberty, and justice for all. In regard to that statement, maybe it is, maybe it’s not, that’s for you to decide. What is certain in the U.S. war dilemma throughout its history is that it is one of the country’s most polarizing and divisive topics when it comes to public opinion surrounding whether or not the U.S. should go to war.

With polarizing topics comes polarizing views, and the topic of war is one that has sent many Americans into a frenzy of divisions. Divided in opinion among class, race, and generation to mention a few, some have even received Supreme Court recognition, changing the tone of the war as well as extra-war issues. A famous example of a “war opinion” making headlines as a Supreme Court case is Tinker v. Des Moines Independent Community School District in 1968.

Tinker v. Des Moines was brought to the Supreme Court after Mary Beth and John Tinker, shown above, wore black armbands to school in protest of the Vietnam War and were suspended for it. Eventually, the Tinker’s stayed home from school for an entire week, and returned to school wearing all black to no avail. The Tinker’s brought the school to court and after the case ended in the hands of the highest court of the land, they won and it was proclaimed that symbols are included within one’s freedom of speech.

Tinker v. Des Moines Independent Community School District is simply one of many cases, protests, and “disapprovals” of an American war throughout the country’s alleged 205 years at war. Another prominent resister to the Vietnam War in particular was a Jesuit Priest by the name of Daniel Berrigan whom took his civil disobedience to another level by allowing himself to get arrested to back up his cause. 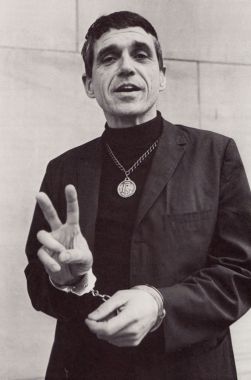 How have American Catholics Felt About American Wars?

As stated earlier, wars have been one of the most divisive topics in American politics when it comes to whether or not the war is logical, or anything else for that matter. Indeed, wars were not only divisive within the general American public, but also within the American Catholic community as well. If it has not become apparent yet, the main idea to be taken away is that Catholics are a very large and diverse group of people, and not all Catholics align the same way on any given issue. Wars in the United States are no exception. For instance, there was Daniel Berrigan, a Jesuit priest whom took his passion for pacifism and upheld it all the way to prison. On the other hand, there has also been a large group of American Catholics who have historically preferred to refrain from involvement, which is best portrayed by William A. Au in “American Catholics and the Dilemma of War 1960-1980:”

While American Catholics have had a strong tradition of involvement in issues of domestic reform, they have never been represented in large numbers or by a strong institutional presence in American anti-war movements.

With two sides of the Catholic aisle in regard to American wars, it can be said that Daniel Berrigan is an example of a Catholic force that exemplified the subtle but harsh reality of  Catholics and their relation to war in regard to their faith.